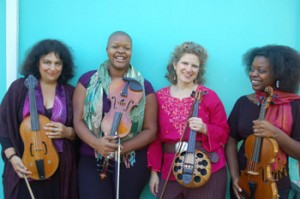 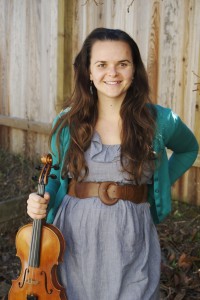 What the press is saying about Teslim

“Teslim’s Kaila Flexer and Gari Hegedus are, respectively, a violinist and an instrumentalist of bewildering proficiency, including the oud, lauoto (an eight-stringed Greek lute), frame drums and viola. Together they make exquisite music, drawing inspiration from Sephardic, Greek and Turkish traditional sources. Their tunes are exotic, and their virtuosity is spellbinding. “Ajuar De Novia Galana/Timarxou Street Dojo” is a medley, blending a Sephardic tune with a Hegedus original. “Stone’s Throw” is a gorgeous original number by Flexer, with Hegedus on viola and guest Olov Johansson on nyckelharpa (a Swedish keyed fiddle). Another Hegedus original, “Petalouda” (“butterfly” in Greek) is a string tour-de-force, featuring Flexer on violin and Hegedus on cura saz and divan saz (Turkish stringed instruments). The album concludes with a gentle medley, “For a 5/Karsilimas for Sara.”
–PVV, Billboard Magazine

“Far more than the sum of its parts, “Teslim” features a remarkable multi-instrumental duo that weaves an exquisite aural tapestry from strands of Balkan, Middle and Near Eastern styles, with a repertoire of original compositions and arrangements based mostly on traditional modes and melodies. Rather than trading on exoticism, violin master Kaila Flexer, best known as a leading West Coast proponent of the klezmer revival, and Gari Hegedus, who plays a dazzling menagerie of string instruments, have created an enthralling body of deeply personal music. This is a singular CD by an utterly original pair of players.”
–Andrew Gilbert, San Jose Mercury News

“Teslim is the realization of a musical awakening for the inspired artistry of Gari Hegedus and Kaila Flexer. Imagine musical siblings separated at birth, and by luck and magic reunite in each other’s inner voice. The twin stringed chemistry and virtuosic interplay is extraordinary as Kaila and Gari forge a fresh musical idiom inspired by the cross-pollinating currents of Turkish, Sephardic and Cretan/Greek music.”
–Dore Stein, Tangents Radio, KALW

“Kaila Flexer and Gari Hegedus have created a CD of wonderfully rich, soulful, and engaging music, drawing from their great musical rapport and obvious shared affection for musical forms originating in the Near East and Asia Minor.”
–Bob Campbell, Folk Music & Beyond KALW,
San Francisco

“The feeling of returning home, both personally and musically, powers this terrific CD. Flexer and Hegedus are creators of new music based on a profound love of traditional Greek, Turkish, Arabic, Jewish, and Balkan musics. Kaila’s fiddle playing is, as ever, supremely subtle and satisfying, and she has a strong kindred spirit in Hegedus.”
–Hollis Taylor, Reviewer for Fiddler Magazine

“I have listened to any number of CDs by extremely talented musicians playing all sorts of music on an incredible array of instruments, but very rarely have I heard music that has managed to affect me in the way this disc did. There is a haunting quality to everything they played that seemed to speak to me on an emotional level that nothing I’ve heard before has done in the same way…Of course, if the two musicians weren’t as incredibly gifted as Kaila Flexer and Gari Hegedus, this might be a different album altogether. For not only are they technically skilled at what they do, but they also have an amazing ability to transmit emotion with their playing. At the same time, they never exaggerate the significance of what you’re hearing, but instead are able to communicate the feelings that are generated by life’s simple pleasures — like watching your grandchild take her first steps — in such a way that it captures the true sublime nature of the moment…Teslim is not only unique because it allows us to perceive the common musical heritage that so many different cultures draw upon, but also because the music on this disc brings the magic of the world alive. This is a beautiful collection that will remind you of what power music can hold in the hands of skilled artists whose love for what they do comes through in every note they play.”
–Richard Marcus, BlogCritics Magazine

“What captures you right away about Teslim’s first CD is that you are not sure if you are hearing music as old as the earth, or brand new compositions, different from anything you’ve ever heard before. The magic is that you are hearing both. Starting with traditional tunes from the Balkans, Greece and Eastern Europe, Kaila Flexer and Gari Hegedus have both improvised upon those themes, and also composed their own music based upon their modes, melodies and rhythms, and then added at-the-moment improvisations that fly! The result is a genuine experience of transport in which we slip between the ancient and the new, the familiar and the unique, hearing this music with our hearts and souls as well as our ears.”
–Carolyn North, author